New Zealand is not famous for its fine cuisine or heritage. however, there are many iconic Kiwi dishes that you should try while in New Zealand. 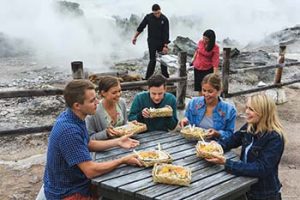 The traditional Māori hangi involves slow-cooking meat and vegetables in an underground pit/oven. This is New Zealand's oldest culinary tradition but is nowadays mostly prepared for special occasions (it takes a long time to prepare), and can be sampled at one of the many Māori cultural events organised throughout the year. Festivals such as Kawhia Kai will provide the opportunity to taste a different kinds of traditional foods while participating in cultural activities. The Kawhia Kai festival is attended by more than 10,000 people every Waitangi Day weekend.

New Zealand crayfish comes in different sizes and tastes and, although not cheap, is obviously a favourite throughout the country (with our 14,000 km coastline...). Coastal town Kaikoura, in the South Island is famous for its recipes!

This caramelised honeycomb recipe is a true Kiwi icon and favoured by children and adults alike, and available from all ice cream parlours throughout the country. 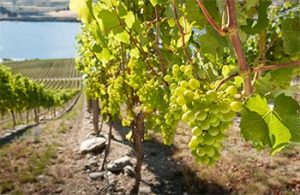 Over the last 30 years, New Zealand has forged a reputation for making some of the best Pinot Noirs and Sauvignon Blancs in the world. There are several wine regions in New Zealand, including Hawke's Bay, Marlborough, and Central Otago, which each their own terroir.

Many travel agencies will organise 'wine tours' throughout the country or focusing on a specific region/terroir/type of wine, allowing you to sample some of the best vintages in the country.

Kina is the Māori name for a type of sea urchin with a hard spiky outer shell. It has been a New Zealand delicacy for centuries but definitely an acquired taste.

Yes, we have our very own burger recipe, and we are proud of it! We add beetroot and a fried egg on top of the usual burger patties for a completely novel burger experience.

Subject to historical debate between Australia and New Zealand as to who invented the recipe, pavlova is the iconic Kiwi dessert. Made with meringue, whipped cream and fruit, it is available all year round, though usually best enjoyed a Christmas season.

L&P stands for “Lemon & Paeroa” after the small North Island town it was invented in. It is a soft drink that tastes lemony. 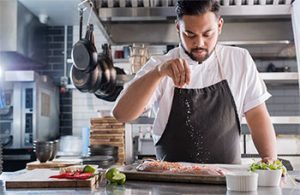 Whitebait is a term that covers most immature fish 2-5cm long. Usually sold in temporary shacks and jetties along the rivers of the West Coast they are usually pan fried or served in an omelette.

Fish in general is very high quality throughout New Zealand and bound to be served in all restaurants, from takeaways to top level establishments.

The pride of New Zealand, our manuka honey is highly regarded globally and prised for its medicinal purposes. Depending on its purity and "UMF" factor, prices can be very high.

Kumara was brought to New Zealand by early Māori settlers and it still a very common staple in New Zealand. It is usually boiled or roasted and served with meat.

Haliotis iris, aka "paua" is a large edible sea snail that is very versatile. It's iridescent shell is commonly used for jewellery and other souvenirs. 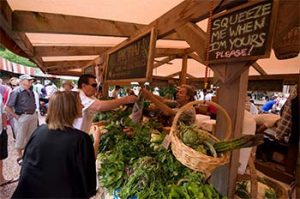 New Zealand lamb is a must-try in New Zealand or anywhere else in the world for that matter, as it is one of our prime exports! Roast lamb is available everywhere and a kiwi favourite for use.

Served with fresh vegetables from the local market, lamb is an absolute delicacy here.

Mince and cheese, steak and cheese, fish, etc. the list goes on. Savoury pies are available everywhere in New Zealand as a quick lunch option.

This list would not be complete with our own take on the traditional Fish and Chips... We have very good fish in New Zealand, so fish and chips is a given. Traditionally wrapped in newspaper and enjoyed at the beast or anywhere overlooking the ocean...