Westland Tai Pounini is the National Park best known for its icy terrain. Some of which includes tongues of ice which extend to sea level. Westland Tai Pounini also features the famous Franz Joseph and Fox Glaciers which attract thousands of visitors per year. Fox Glacier was named in 1872 after a visit from the prime minister at the time; Sir William Fox. Fox Glacier is currently 13km long and is fed by four alpine glaciers and is one of the only in the world to end in lush rainforest.

Both Glaciers have retreated and advanced throughout history with much of the recent retreat being put down to global warming. 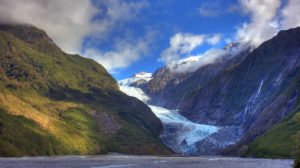