Located just 45 kms west of Hamilton, Raglan is at the same time mecca for surfies and a dramatically scenic area of black sand coastline. It is often said that Raglan's Manu Bay has the longest, most accessible and consistent left-hand break in the world. If you're skilful enough it's possible to catch a wave and cruise for up to two kilometres. Manu Bay (locally known as "The Point") was featured in Endless Summer, a 1966 cult surfing movie .

If surfing is not your thing, go for a swim at Ocean Beach or take a surf lesson with the Raglan Surf School. It can be rough at times so be sure to stay between the flags. During the summer months the beaches are patrolled by lifeguards.

There are several walking tracks in the area. It will take just 10 minutes to get to the top of Bridal Veil Falls (55 metre waterfall pictured below). From the top of nearby Mount Karioi (pictured below) on a fine day you can see all the way to Mount Taranaki. There are also remnants of ancient stone walls that can still be seen in the Toto Gorge Track that was once used extensively by Maori prior to European settlement.

Raglan township is a bustling hive of activity during peak season with an entertaining mix of cafés, bars, surf shops and galleries. This part of New Zealand attracts people who are into a sustainable lifestyle, so the residents are full of character.

Sunshine and surf at Manu Bay 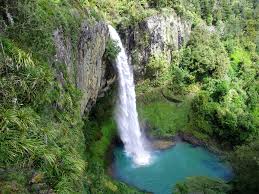