Construction of the Otago Central Branch Railway began in Clyde in 1879 and the 152km line took 16 years to complete. The line was originally used to transport supplies to and from the Gold Fields and then later to transport goods and livestock. By the late 1980s the line was being used less and less and the decision was made to strip the line and develop it to be suitable for walkers, cyclists and horse riders. The trail officially opened in 2000 to the public and in 2012 it became part of the New Zealand Cycle Trail.

The trail is steeped in history and culture with various sights including old gold diggings left over from the gold rush and New Zealand’s only International Ice Curling Rink. The entire trail can take 4-5 days depending on how ling you spend exploring along the way. However, if you are wanting a shorter ride then you are able to stop and start at any of the 20 townships which are located along the way.

The trail is open year round, however careful planning and preparation should be taken at all times as Central Otago is a place of extremes with very cold winters and hot summers. The trail itself is easy, with minimal long climbs and there are various food and accommodation options along the way which can be easily researched and booked 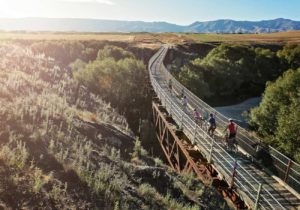